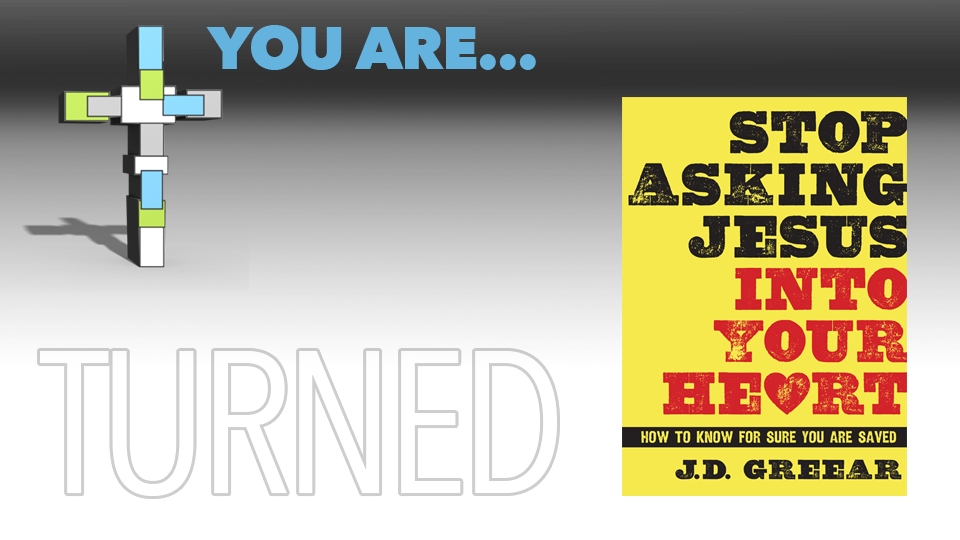 Quotes from Stop Asking Jesus Into Your Heart
by J.D. Greear

Here is how many Christians think of “getting saved”: they realize they’re a sinner and they need Jesus to save them. So they approach Him and ask Him to come into their heart. Of course He says, “yes,” at which time He forgives their sins, writes their names in the Lamb’s Book of Life, gives them a “certificate” of salvation . . . and commences a party in heaven in their honor. If they begin to doubt later whether or not they are really “saved,” they replay in their minds that moment of conversion, assuring themselves of their sincerity and reminding themselves of the feelings they had after it. Works great. At least until your memory fails you. Or if you start to wonder if you did it right. Or if you have deceived yourself into thinking something happened that really didn’t. And what if you begin to ask, as I did, Did I really feel sorry enough for my sin? Did my life change enough after I asked Him into my heart? Did I understand enough about Jesus, or my sin, or grace, when I prayed? Were there areas of rebellion I was unaware of? Uh-oh. Better ask Him to come into your life again. So back you go to Jesus, asking for another “certificate.” (41)

The Bible depicts the moment of salvation differently. Instead of asking Jesus for a “certificate” of salvation, you start believing what God’s Word says about His Lordship and His completed work at the cross. You understand that you have lived in rebellion against the rule of God and have no hope of escaping God’s wrath on your own. You “kneel” in submission to His claim on your life, and rest your hope of heaven upon Him. Picture this as hopping up into His arms, submitting to go wherever He takes you, and trusting in Him to carry you into heaven. If at some point in the future you begin to doubt whether or not you really have put faith in Jesus, do you look backwards to try and remember that moment when you first hopped up into His arms? I suppose you could. Better, though, would be to look at where you are currently resting. If you are right now resting in His arms, knowing when you began to rest is less important than that you are doing it now. Your present posture is more important than a past memory. (42)

If we think that we have spiritual life in ourselves—that we are worthy of God’s acceptance, or that we can be good enough to earn God’s approval if we just try a little harder, or that God knows we are doing our best and will accept our good intentions—we reject God’s testimony about the indispensability of Jesus and call Him a liar. The testimony is that we are hopelessly wicked, spiritually dead, and without hope apart from God’s intervention. (28)

Truly admitting unworthiness and inability is difficult because we have spent our whole lives trying to prove we are anything but unworthy. Most people will admit they make mistakes and are not perfect but far fewer will go on from there to admit their “mistakes” make them unworthy of eternal life and worthy of utter condemnation. We want to believe that our mistakes are not that bad, that deep down we are still pretty good people. You can hear this in how we downplay the “badness” of our sin. We describe our sin as “mistakes,” “lapses in judgment,” or “indiscretions.” We acknowledge that we are not perfect, but maintain that, at our core, we are still good, decent people. Thus, we deserve good things—good salaries, respect and recognition—and we’ll fight anyone who challenges that (28, 29)

When the writer of Hebrews honors the great Old Testament heroes of faith, he identifies every single one with an action. Noah constructed an ark; Abraham left his home; Jacob blessed his grandsons; Joseph gave instructions concerning his bones; Moses chose to be mistreated; and Joshua circled the wall of Jericho. The great chapter of faith is all about actions. Faith is belief in action. (40)

Biblical belief is the assumption of a new posture toward the Lordship of Christ and His finished work on the cross . . . we might express our assumption of that new posture as a “sinner’s prayer”—or by “asking Jesus into our hearts,” or some equivalent thereof—but just because we’ve prayed that prayer doesn’t necessarily mean we have repented and believed. The flip side is also true: just because we haven’t prayer that prayer (or can’t remember praying it) doesn’t mean we haven’t repented and believed. (41)

Children that grow up in unbelieving homes will likely have a memorable conversion to Christ where they pass from darkness to light. But I want my kids to grow up in the light. Personally, I’d prefer they NOT have an “exciting” testimony that involves years of rebellion, foolishness and unbelief. I want each of my kids to have a nice, “boring” testimony; to be kids who spend their whole lives enraptured with what God did for them in Jesus. (49)

If you follow Jesus in 99 percent of His teachings but deliberately hold back 1 percent, you have not repented. You are still choosing which 99 percent to surrender and which 1 percent to keep, which means you are still in charge. You haven’t really changed your mind about Jesus. (56)

You don’t follow Jesus like you follow someone on Twitter, where you are free to take or leave their thoughts at your leisure. Following Jesus is not letting Him come into your life to be an influence, even if it’s a significant influence. Following Jesus means submitting to Him in all areas at all times regardless of whether you agree with what He says or not. (61)

When those who believe the gospel fall, they renew their posture of repentance, re-embrace the gift-righteousness of Christ, thank God for the promise of their victory, and get back up. Those who do not believe the gospel wallow in their failure. They soar with pride when they are doing well; but plunge into despair when they falter. (65)

Faith is not the absence of doubt; it is continuing to follow Jesus in the midst of doubt. (66)

Likewise, we continue to follow Jesus as we struggle with sin. Repentance ushers us into a life of greater struggle, not out of one. While I’ve heard of some people who were immediately released from certain sinful desires, like alcoholism, anger, or same-sex attraction when they received Christ, as a pastor of fifteen years I can say that that is not the normal experience of new believers. Christians, like the apostle Paul, continue to struggle with sin, often unsuccessfully, for the rest of their lives. The struggle is proof of their new nature. They fall often, but when they do, they always get up looking His direction. (67)

Be encouraged: a desire to desire God is the first echo of a heart awakened to God. The gospel, in that sense, is like a seed that starts small but blossoms into a mighty tree. Don’t grow discouraged at how slowly the plant seems to be growing. Quit focusing on that and focus on Jesus instead. Resting in His completed work is what grows you the fastest. If you dig up a seed you’ve planted every few days to analyze its progress, not only will you be discouraged at how slowly it is progressing, you’ll probably impede its growth as well. (71)

We are not to take a “wait and see” posture about whether or not we have truly been saved: “Well, I’m falling away right now, that must mean I am not saved.” Instead, we are commanded to labor and to strive to keep ourselves in the faith. (89)

Faith most certainly includes an attitude of repentance toward God that expresses itself in good works. These expressions of faith, however, cannot be confused with faith itself. Faith’s object is Christ and His substitutionary work alone. Saving faith looks outside of itself to what Christ has done, not back onto itself at what it has done. (118)

Salvation is not a prayer you pray in a one-time ceremony and then move on from; salvation is a posture of repentance and faith that you begin in a moment and maintain for the rest of your life. (5)

A 2011 Barna study shows that nearly half of all adults in America have prayed such a prayer, and subsequently believe they are going to heaven, though many of them rarely, if ever, attend a church, read the Bible personally, or have lifestyles that differ in any significant way from those outside the church. (6)

Evangelical shorthand for the gospel is to “ask Jesus into your heart,” or “accept Jesus as Lord and Savior,” or “give your heart to Jesus.” These phrases may not be wrong in themselves, but the Bible never tells us, specifically, to seek salvation in those ways. The biblical summation of a saving response toward Christ is “repentance” and “belief” in the gospel. (7)

Repentance and faith are heart postures you take toward the finished work of Christ. You might express the beginning of that posture in a prayer. But don’t make the mistake of equating that prayer with the posture. The sinner’s prayer is not a magic incantation or a recipe you follow to get salvation cake. The real stuff—the stuff that matters—is the posture of repentance and faith behind the words you speak. The prayer is good only insofar as it verbalizes the posture. (8)

I can say with certainty that God want you to have certainty about your salvation. He changes, encourages and motivates us not by the uncertainty of fear, but by the security of love. That is one of the things that makes the gospel absolutely distinct from all other religious messages in the world. (13)

A faithful father does not leave his kids wondering whether or not he loves them. When I have to go away on a trip, I don’t say to my kids, “Daddy will be back soon . . . or maybe he won’t. Maybe I’m not really your daddy at all. Maybe my real family lives somewhere else. You’ll just have to wait and see if I come back. Sit around and think about that while I’m gone, and let that compel you to become better children.” That would not produce love and loyalty in my children. It might produce a little fear-based obedience, but it’s only a matter of time until fear-based obedience turns into father-loathing rebellion. If I don’t want my own children fearing they might be orphans, would God? (19)

Eternal life is not just a reality we enter into when we die; it is something that comes into us now, and its evidences appear everywhere. (24)

YOU ARE... DISCIPLE-MAKERS: Resource Guide

Book Review: Quotes from The Compelling Community by Mark Dever and Jamie Dunlop

Book Review: Quotes from What is a Healthy Church Member? by Thabiti Anyabwile

YOU ARE... RESPONSIBLE: Resource Guide

YOU ARE... OPPOSED: Resource Guide

YOU ARE... EMPOWERED: Resource Guide

YOU ARE... DEPENDENT: Resource Guide

Book Review: Quotes from Taking God At His Word by Kevin DeYoung

YOU ARE... GUIDED: Resource Guide

Book Review: Quotes from The Hole in Our Holiness by Kevin DeYoung

YOU ARE... RENEWED: Resource Guide

YOU ARE... IDENTIFIED: Resource Guide

Book Review: Quotes from The Truth of the Cross

the story of: Path of Life ministries, Spokane

Resources for YOU ARE... a series on Christian Basics at Indian Trail Church