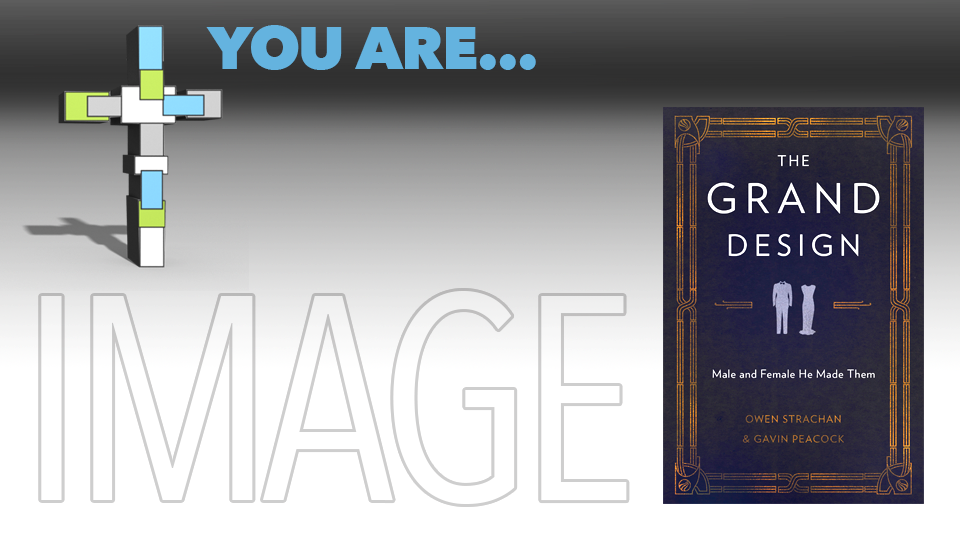 Quotes from The Grand Design
by Owen Strachan and Gavin Peacock

There is no specific meaning of manhood and womanhood, and thus there is no structure or plan for sex. (14)

Here we come face-to-face with a major problem, though: many boys have no idea today what it means to be a man (20)

It is not only the most impressive human specimen to carry this title, Image of God. It is every single person, boy and girl, man and woman. (22)

The language of this concept is loaded with intentionality: He created male and female.(22)

God, the Bible is telling us, did this. He made men and women. He designed their form and friend. He programmed their biology and physiology. (22)

This means that the helper needed to be like him as a human (and not a beast or flower) but distinct from him. This is the essence of complementarity: one suited to us, who fits with us, but is not precisely the same as us. (29)

Biblical womanhood is the most exciting take on femininity the world has ever seen. Genesis 2 suggest that a woman has inherent value as a special creation of the Lord. Women do not need to be beautiful, attractive, omnicompetent, outgoing, or powerful to have value. Already, as God- created women, they have value. They possess dignity. Almighty God has spoken to the nature of womanhood, and he has shown that He sees it as essential for human flourishing. (34)

When a city was under siege, the men of the city were needed to breach any gaps in the wall in order to protect the people within. Now as then, God wants men who stand in the breach. He wants men who refused to go quietly in the night, and will not allow women and children to suffer. He wants men like Abraham, Moses, Ezekiel in the Apostle Paul to stand in the gap, pray, and assume responsibility to lead themselves, their wives, children and churches away from the wrath of God and towards the grace of God in Christ. (48)

Unregenerate manhood preys on women, weakening them and using them. Biblical manhood protects women, loving them through gracious leadership. Instead of taking from women as unsaved men do, godly men provide for women in appropriate ways, with the apex of this duty coming in marital provision(1 Timothy 5:8). (49)

Manhood is in great part about being a man of prayer. Prayer displays dependency on God. Far from being self-sufficient, men of God are desperate and weak. (56)

A biblical man spends time with God and he is a biblical man to the extent that he does this. This is a strong statement, but a needed one. He is on his knees, seeking God's will and glory, praying for holiness, praying for his wife and children, praying for his ministry, praying for his church and nation. He sees this as his holy responsibility. He enjoys God's common grace gifts, but he structures his life so that he can pray and study Scripture. Those observing his life will say," He is a man captured by God. He is not obsessed with culture or sports or entertainment. He is driven, fundamentally, to know God.” (57)

Even as he calls all believers to maturity, Paul recognizes that there is a specific way that a man should act, with manly bravery. This is not a call to be macho but to be mature. (58)

A fallen world ruled by a fallen angel seeks to turn women away from God's good design for women. We see why Satan would foment support for abortion. By targeting children in the world, he guts a key part of the glory of womanhood. He ruins an incredible gift of God. Not only does he rob God of His glory, he robs many women of their identity in turning them against the child inside them. (73)

A wife can help to draw leadership out of her husband by graciously engaging him. This does not mean jumping in where there is a void. It means prayerfully waiting for him to act and, if necessary, encouraging him to take the lead. (76)

Godly girls are being trained to assume this role well before they enter it formally in a marriage. (77)

Though a woman is born female, the culture has lost sight of what feminine behavior looks like. (79)

Reverence is the key posture of womanhood. (80)

There is a desperate need for spiritual mothers who know what it looks like to be reverent, who model it for young girls in a way a man cannot and who teach to other women. (82)

This is not about my making the decision but my leading her in our making a decision as one. (98)

If a decision must be made and we are both in deadlock, then I am responsible before God to make that decision: rather than it being my right, it is my responsibility. If it proves me correct I don't lord it over Amanda, and if I am wrong, I take the blame and protect her from the consequences. (98)

Some husbands are great physical protectors and providers. There is food on the table and a roof over his wife's head, and he would never let anyone touch her. But when it comes to spiritual protection and provision he fails. Yet this is a primary means of her growth and a primary way that he loves her. (100)

Children should come into the home and fit under the authority of the central relationship of husband and wife. It is vital that parents are the leaders, not the children, because parents represent the authority of God to their children. (105)

We seek a humble heart that places God's wisdom above its own. It trusts that when He says "no" that is as gloriously good for us as when He says "yes". (115)

Too often, evangelicals savor the aesthetic wisdom of God seen in the mountains but ignore the master-stroke of God’s work in humankind. (129)

Many of us seek some kind of third way to address homosexuality. We feel weird having such a stubbornly moral perspective. But our charge as believers is to declare the mind of God and watch as the Holy Spirit convicts, converts, and conforms. There is no place in the Bible that requires us to soften the declared will of God. Nothing in Scripture needs reworking. Nothing is insufficient. Nothing is deficient. The Word of God is pure as mountain snow. Our charge is to tell the truth about all sin, and point our hearers to Christ as the remedy. (138)

The key that unlocks a healthy marriage is known by Christians alone: that marriage is not made for its own sake, but for a God who has designed the earth's oldest institution to image the covenantal love of Christlike husband and a churchlike wife. (156)

There is thus a plan and intention for sex, it allows for the fullest possible union of a couple, the experience of togetherness that joins together physical, emotional, and spiritual pleasure. (160)

The great news is that the good news takes us who are bad news and makes us new. The gospel of Christ crucified for our justification and raised for our vindication ruins us and remakes us. (169)

YOU ARE... DISCIPLE-MAKERS: Resource Guide

Book Review: Quotes from The Compelling Community by Mark Dever and Jamie Dunlop

Book Review: Quotes from What is a Healthy Church Member? by Thabiti Anyabwile

YOU ARE... RESPONSIBLE: Resource Guide

YOU ARE... OPPOSED: Resource Guide

YOU ARE... EMPOWERED: Resource Guide

YOU ARE... DEPENDENT: Resource Guide

Book Review: Quotes from Taking God At His Word by Kevin DeYoung

YOU ARE... GUIDED: Resource Guide

Book Review: Quotes from The Hole in Our Holiness by Kevin DeYoung

YOU ARE... RENEWED: Resource Guide

YOU ARE... IDENTIFIED: Resource Guide

Book Review: Quotes from The Truth of the Cross

the story of: Path of Life ministries, Spokane

Resources for YOU ARE... a series on Christian Basics at Indian Trail Church